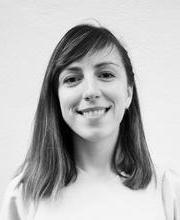 
As an experimental engineer, my research seeks to exploit interaction of high frequency waves (microwave or terahertz) with light mediated by nonlinear materials. I seek to invent and innovate future hybrid optical technologies to reach terahertz speeds by on-chip integration and photonic design, e.g. in (quantum) metrology, precision sensing and reconfigurable photonics.

The Hybrid Photonics Laboratory at EPFL tackles questions revolving around quantum sensing and metrology on ultra-fast time-scales and generation and synthesis of far-infrared waveforms at will. For this, we research coherent electro-optic interfaces with the latest integrated photonics technology and nano-optics.

Ileana-Cristina Benea-Chelmus is an Assistant Professor of Microengineering at the Institute of Electro and Microengineering at EPFL since January 2022. She is also a Research Associate affiliated with the group of Prof. Federico Capasso at Harvard University.

Prior to her appointment, she was a Postdoctoral scientist and SNF fellow in the group of Prof. Federico Capasso at Harvard University, USA in the John A. Harvard school of engineering and applied sciences since March 2019 to December 2021. She lead efforts on tunable metasurfaces enabled by nonlinear optics, supported through a personal grant from the Hans-Eggenberger Foundation. Apart from science, she was actively driving advocacy work within the postdoctoral association at Harvard.

She holds a Bachelor Degree in Electrical Engineering and Information Technology (2010) and a Master Degree with distinction in Optics and Photonics (2013) – both from KIT, Germany. During her master, she spent one year at EPFL (2011) as an ERASMUS Exchange student in Physics, where she acquired in-depth knowledge of solid-state physics, quantum mechanics and biotechnology. During her Bachelor, she received a stipend from the Anna-Ruths Foundation. In the summer of 2009, she was awarded a research stipend from DAAD “Rise in North America” to perform a summer internship at Vanderbilt University, TN, and became a scholar of SyBBURE. For her Master studies, Ileana-Cristina was awarded an excellence stipend from the Karlsruhe School of Optics and Photonics which she absolved with merits. She was selected to participate in extended carrier building programs such as "Female talents at IBM and KIT" as well as "Femtec". She did a summer internship at IMEC in Belgium and IBM Research in Zurich under the supervision of Dr. Armin Knoll. For her Master thesis she decided to join the group of Prof. Jérôme Faist and work on terahertz quantum cascade lasers and their applications in spectroscopy. She continued with her Ph.D. thesis in the same lab on quantum science. She started very early to drive a substantial proportion of the research work done in the framework of an ERC Advanced grant. She developed, as the first one in this field, the research branch of time-domain quantum optics at terahertz frequencies. She developed ultrasensitive time-domain detectors.

She engages with various communities, centers and associations at EPFL and Harvard.