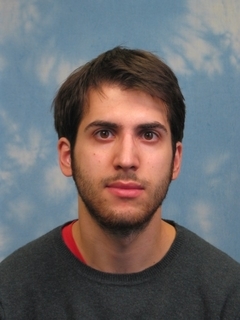 
As a scientist, my goals are to conduct cutting edge research, participate in the training of new engineers and researchers, and spread scientific knowledge to the general public.

The aim of my PhD is to investigate what happens at the interface of two surfaces when rubbed against one another. This process involves several strongly tied phenomena - namely friction, contact and wear - whose physical origins are still poorly understood. By means of numerical modeling and thanks to the available HPC resources, I'm focusing on the surface roughness evolution during adhesive wear processes.

I am or have been assistant for several classes, whose subjects range from calculus through solid mechanics up to finite element modeling, and supervisor for projects both at bachelor and master level.

I strongly believe that what we scientists learn at the frontiers of the knowledge needs to be delivered to the general public, in the most digestible and effective fashion. I am thus actively involved in science communication as a member of the Catalyst and my passion is to explain science through films (and am a proud winner of Exposure 2016 edition).


I graduated in Civil Engineering (major in Structural Engineering) at the University of Padua in April 2014, discussing my thesis on avalanche behavior in disordered inhomogeneous media. I carried out the thesis under the supervision of Prof. B.A. Schrefler (DICEA, UniPD) and Prof. J.F. Molinari (LSMS, EPFL).
After graduation I worked as a consultant in a company in Venice providing civil engineering and architectural services. In the meantime, I continued my collaboration with DICEA and LSMS, investigating avalanche behavior and pressure fluctuations in fracturing porous media.
In late 2015 I gave up the consultant job to dedicate myself to research, starting a PhD at LSMS in April 2016.

A. Solidoro; G. Viscusi : Digital Transformation and Business Model Innovation in the Film Industry: The Case of Movieday.it; Technology and Creativity Production, Mediation and Evaluation in the Digital Age; Palgrave Macmillan, 2020-01-01. p. 239-265.

G. Drevon; A. Gumy : Understanding multimodality through rhythm of life. An empirical evidence from the Swiss case study.; Handbook of urban mobilities; Routledge, 2020-01-01.

G. Güell Bartrina : Introduction to dynamics with finite elements: a study of wave dynamics and applications to metaconcrete ; 2018.

S. A. Durussel : Introduction to Discrete Modeling for Engineering ; 2017.