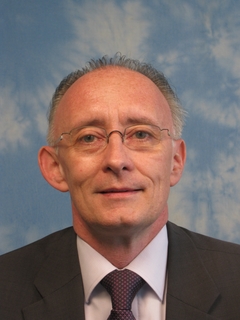 Stéphane Decoutère was born in Brussels (Belgium) in 1960.

At the age of ten, he left Belgium to live in Switzerland (his mother's native country).

He worked from 1985 to 2000 in the scientific field as well as in the private sector (communication), in particular as a scientific assistant at the University of Fribourg (1985-1989), than as a scientist and research project manager (1989-1995) at EPFL (CEAT) and finally as a scientific advisor to the regional government of Canton Wallis at the Center of Public Management of Sion (1996-2000).

During the following years, Stéphane Decoutère has been directly involved in the Swiss education, research and innovation policy, on both national and international level.

In December 2000, he joined the Swiss administration as personal advisor to Mr. Eric Fumeaux, Director General of the Swiss Federal Office for Professional Education and Technology and President of the Swiss Agency for Innovation (CTI - Swiss Innovation).

In June 2005, he was appointed as personal advisor to Federal Councillor Pascal Couchepin, the Swiss Minister of Education, Research, Culture, Health and Social affairs as well as President of the Swiss Confederation in 2003 and 2008.

In May 2010, after accompanying the first months in office of Pascal Couchepin's successor, Federal Councillor Didier Burkhalter, Stéphane Decoutère joined EPFL to work with President Patrick Aebischer as Head of External Affairs to the EPFL President.

As Head of Governmental Affairs to the EPFL President, Stéphane Decoutère is supporting President Martin Vetterli in his task of developing and promoting EPFL.