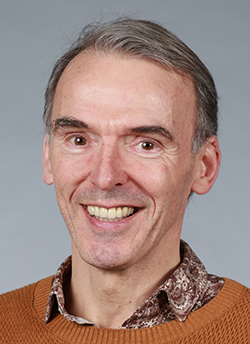 TEACHING: I greatly appreciate to teach the basis of Computer Science (ICC), Programming and Software Engineering to first year's students from the Microtechnique and Electricity sections. These two courses have been merged into a single larger course of "Computational Thinking" starting in September 2018. I also teach the Virtual Reality Ms Course in spring with the aim to build a bridge with experimental sciences.

EPFL SERVICE: member of two doctoral school committees : EDIC (2015-2017) and EDRS (2012-on-going). Advising PhD students and teaching first led me to be part of the EPFL Teaching Staff Assembly / "CCE :Conference des Enseignants" from 2007 to discuss related issues. In October 1st 2010, I was elected President of the EPFL Teaching Staff Assembly (until spring 2013). We were providing recommendations about all new legal text related to the teaching, and actively involved in the on-going discussions about the Bachelor reform, MOOCs, Polymath, and the teaching infrastructure.

Since September 2008 I participate to the IC Faculty council and since September 2014 I was one of the four teaching staff members at the school Assembly "AE: Assemblée d'Ecole". I was Vice-president from September 2017 to december 2017, and President ad interim from January to August 2018. Within these 4 years at the AE I have led various working groups associated to consultations, for example the revision of the admission rules to the first year, and the evaluation of teaching.

I was hired in 1989 as First Assistant in the VRLAB, I became scientific collaborator, and senior researcher. I'm presently Senior Scientist (MER) and leader of the Immersive Interaction research Group (IIG).

I'm co-author of around 150 research papers among which 43 appeared in international peer-reviewed journals. I have contributed to multiple SNF projects and EU projects. Please check iig.epfl.ch for more details.

A review of cybersickness in head‐mounted displays: raising attention to individual susceptibility

Eye Thought You Were Sick! Exploring Eye Behaviors for Cybersickness Detection in VR

A Too to Design Interactive Characters Based on Embodied Cognition

Reconciling Being in-Control vs. Being Helped for the Execution of Complex Movements in VR

The Critical Role of Self-Contact for Embodiment in Virtual Reality

One Step from the Locomotion to the Stepping Pattern

Towards a Disambiguation Canvas

Spatial Awareness in Full-Body Immersive Interactions: Where Do We Stand?

Real-Time Joint Coupling of the Spine for Inverse Kinematics

2006. of the SAE Conference on Digital Human Modeling for Design and Engineering, Lyon, France, July 2006.

From Measurements to Model: the Walk Engine

Parametrization and range of motion of the ball-and-socket joint

Using an Intermediate Skeleton and Inverse Kinematics for Motion Retargeting

Real-time display of virtual humans: levels of details and impostors

Kinematic control of the mass properties of redundant articulated bodies

A paradigm for controlling virtual humans in urban environment simulations

Using an intermediate skeleton and inverse kinematics for motion retargeting

Virtual human life simulation and database: why and how

An efficient and flexible perception pipeline for autonomous agents

An architecture for immersive evaluation of complex human tasks

One Step Towards Virtual Human Management for Urban Environment Simulation

A Comparison of Design Strategies for 3D Human Motions

A Robust Motion Signature for the Analysis of Knee Trajectories

Virtual and Real Humans Interacting in the Virtual World

A Stereoscopic Restitution Environment for 3D anaysis of Gait

TRACK: A Kinematic Goal-Oriented Animation System for Coordinated Editing of Joint-Space Based Motions

An interactive tool for the design of human free-walking trajectories

Coach-Trainee: A New Methodology for the Correction of Predefined Motions

This course focuses on the complementary features of the C language that allow to design robust modular applications (principle of separation of concerns). The practice dimension is deemed particularly important ; for this reason a significant time is devoted to a project.

The goal is this course is to introduce students to computational thinking, to present fondamental ideas of computer science and to develop their first programming skills (C language).