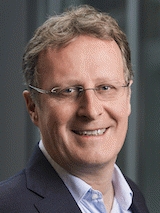 Rüdiger Urbanke's research is sponsored by the Swiss National Science Foundation, the NCCR/MICS (National Center of Competence in Research / Mobile Information & Communication Systems) as well as the CTI.