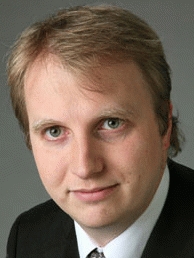 Andreas Burg was born in Munich, Germany, in 1975. He received his Dipl.-Ing. degree in 2000 from the Swiss Federal Institute of Technology (ETH) Zurich, Zurich, Switzerland. He then joined the Integrated Systems Laboratory of ETH Zurich, from where he graduated with the Dr. sc. techn. degree in 2006. In 1998, he worked at Siemens Semiconductors, San Jose, CA. During his doctoral studies, he was an intern with Bell Labs Wireless Research for a total of one year. From 2006 to 2007, he held positions as postdoctoral researcher at the Integrated Systems Laboratory and at the Communication Theory Group of the ETH Zurich. In 2007 he co-founded Celestrius, an ETH-spinoff in the field of MIMO wireless communication, where he was responsible for the ASIC development as Director for VLSI. In January 2009, he joined ETH Zurich as SNF Assistant Professor and as head of the Signal Processing Circuits and Systems group at the Integrated Systems Laboratory. In January 2011, he became a Tenure Track Assistant Professor at the Ecole Polytechnique Federale de Lausanne (EPFL) where he is leading the Telecommunications Circuits Laboratory in the School of Engineering. In June 2018 he was promoted to the role of a Tenured Associate Professor. In 2000, Mr. Burg received the Willi Studer Award and the ETH Medal for his diploma and his diploma thesis, respectively. Mr. Burg was also awarded an ETH Medal for his Ph.D. dissertation in 2006. In 2008, he received a 4-years grant from the Swiss National Science Foundation (SNF) for an SNF Assistant Professorship. In his professional career, Mr. Burg was involved in the development of more than 25 ASICs. He is a member of the IEEE and of the European Association for Signal Processing (EURASIP). Research interests and expertise * Circuits and systems for telecommunications (wireless and wired) * Prototyping and silicon implementation of new communication technologies * Development of communication algorithms and optimization for hardware implementation * Low-power VLSI signal processing for communications and other applications * Digital integrated circuits * Circuits for image and video processing