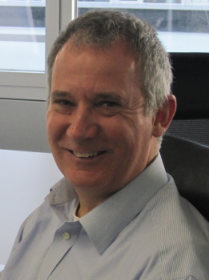 Julian received his PhD at Simon Fraser University in Canada for work on Monte Carlo simulations of liquid crystal phase transitions and the elastic properties of fluid and polymerized membranes.

He was a Group Leader at the Max Planck Institute of Colloids and Interfaces, Germany for five years applying coarse-grained simulation techniques - principally Dissipative Particle Dynamics (DPD) and Brownian Dynamics - to equilibrium and dynamic properties of fluid lipid membranes. A major target of this research was to reveal the molecular rearrangements that occur during vesicle fusion. During this time, he developed a commercially-available, parallel DPD code that is being used by several universities.

He was an Associate Professor at MEMPHYS in the Department of Physics and Chemistry, University of Southern Denmark. He has also worked in industry, designing and writing software for communication satellite simulations (British Aerospace, 1986-1990), and fluid simulation software (Accelrys, Inc., 1998-1999).

He joined the Blue Brain Project in 2011, and uses mesoscale simulation techniques, together with theoretical analysis and collaborations with experimentalists, to study the dynamics of cellular processes. Current projects include simulating the formation of the post-synaptic density in dendritic spines and developing theoretical models of the supramolecular organisation of synapses. He also teaches Master's and PhD courses in computational cell biology and biophysics.

Investigating the morphological transitions in an associative surfactant ternary system

Phase behaviour and structure of a model biomolecular condensate

Clustering on Membranes: Fluctuations and More

Reconstructing the brain: from image stacks to neuron synthesis

In situ synthesis and simulation of polydisperse amphiphilic membranes

The effects of globotriaosylceramide tail saturation level on bilayer phases

Biomolecular condensates are fluid droplets of protein that form in the cellular cytoplasm and nucleoplasm by a process of liquid liquid phase separation (LLPS). Their constituents are intrinsically disordered proteins that lack a unique folded state and, often, RNA. Unlike better known organelles they have no bounding lipid membrane, which makes their formation and stability an intriguing problem to study. In healthy cells, protein condensates reversibly form and dissolve under cellular control, but in neurodegenerative diseases such as Alzheimer's, Parkinson's and Huntington's disease, they undergo an aberrant phase transition into a pathologically irreversible, rigid state. Experiments have revealed dozens of examples of biomolecular condensates and their involvement in cellular functions. But it is still unknown how their properties emerge from the molecular details of their constituents, and how their stability and dynamics is controlled in the absence of a containing membrane. Understanding how intrinsically disordered proteins reversibly form these condensates, and what goes wrong in neurodegenerative diseases, will help to reveal novel therapeutic pathways for intervention in these diseases.

I am using theoretical modelling to study LLPS in cells, particularly the neuronal postsynaptic density (PSD). This is a biomolecular condensate containing membrane receptors, scaffolding proteins, and signalling molecules. It is attached to the postsynaptic membrane of excitatory neurons where it connects to actin filaments within the neuron's dendrite. It plays a key role in learning and memory and its dysfunction is implicated in autism spectrum disorder and mental retardation. It shares many features with cytoplasmic and nucleoplasmic condensates but with the difference of being closely associated with a lipid membrane. Recently, membrane-mediated forces have been found to influence the clustering of proteins, and to play a role in bacterial infection of cells. It is likely that the PSD is strongly influenced by the state of the post-synaptic membrane, and that learning relies not only on biochemical processing, but on physical remodelling of the membrane itself via scaffolding proteins and cell adhesion molecules that regulate the stability of the synapse.

The plasma membrane of cells protects the interior from the environment while permitting signals to be transduced across it and allowing material to be taken in or expelled in a controlled way. Bacteria and viruses have evolved to co-opt signalling and endocytic pathways to invade a cell in order to propagate themselves. Some of these pathways are independent of the cellular endocytic machinery, an example being that used by Ricin, Shiga and Shiga-like bacterial toxins.

Shiga toxin invasion begins when toxin particles in the bulk solution adsorb to the plasma membrane by binding to globotriaosylceramide glyoclipids (Gb3) lipids. They subsequently diffuse around and form clusters. This clustering process takes place over distances much larger than the particle size, and in the absence of direct protein-protein attractive forces. We have used atomistic and mesoscopic simulations to characterise the toxin's interaction with the membrane, and fluorescence correlation spectroscopy on live cell and model membrane systems (giant unilamellar vesicles) to quantify the clustering process. The results suggest that toxin clustering is driven by a thermal Casimir force that arises because the tightly-bound toxin particles suppress the membrane's shape fluctuations, thereby lowering its entropy. By forcing the particles to cluster, the remainder of the membrane can fluctuate more freely. The clustered toxin particles induce the membrane to curve inwards and produce a tubule covered in the toxins. This is pinched off by Dynamin and enters the cellular endocytic pathway where, eventually, the toxins inhibit protein translation by damaging ribosomes and kill the cell. This results in hemorrhagic colitis or hemolytic uremic syndrome that carry the bacteria from the body to propagate further.

I have developed and maintain a parallel Dissipative Particle Dynamics (DPD) code to perform complex fluid simulations on length and time scales far beyond those attainable with Molecular Dynamics simulations. The code is used under license from the Max Planck Institute, where part of it was developed. It uses the common Message Passing Interface protocol, and its execution shows excellent weak scaling up to 2000 processors. The code has been used in more than a dozen publications, and is in current use at several universities and research institutes.

I am working with Imperial College London and the University of Southampton to implement the code on a novel computing platform called POETS - Partially-Oriented Event Triggered Systems (www.poets-project.org) which has the potential to speed up DPD simulations by several orders of magnitude. POETS is funded by the UK's Engineering and Physical Sciences Research Council (https://gow.epsrc.ukri.org/NGBOViewGrant.aspx?GrantRef=EP/N031768/1).

Symmetry and Conservation in the Cell

Computer modelling is increasingly used to study dynamic phenomena in cell biology. This course shows how to identify common mathematical features in cell biological mechanisms, and become proficient in selecting numerical algorithms to model them and predict their behaviour.
close