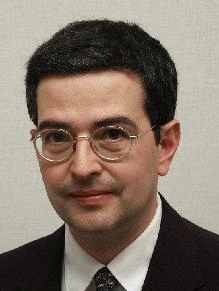 Alfredo Pasquarello studied physics at the Scuola Normale Superiore of Pisa and at the University of Pisa, obtaining their respective degrees in 1986. He obtained a doctoral degree at the EPFL in 1991 with a thesis on Multiphoton Transitions in Solids. Then, he moved to Bell Laboratories at Murray Hill (New Jersey), where he carried out postdoctoral research on the magnetic properties of carbon fullerenes. In 1993, he joined the Institute for Numerical Research in the Physics of Materials (IRRMA), where his activity involved first-principles simulation methods. In 1998, he was awarded the EPFL Latsis Prize for his research work on disordered silica materials. Succeeding in grant programs of the Swiss National Science Foundation, he then set up his own research group at IRRMA. In July 2003, he is appointed Professor in Theoretical Condensed Matter Physics at EPFL. Currently, he leads the Chair of Atomic Scale Simulation.

Alfredo Pasquarello teaches Computer simulation of physical systems I and II at the School of Physics and Physique générale III & IV at the Schools of Mechanical Engineering and Microengineering.

The research activity covers the study of atomic-scale phenomena both from the structural and dynamical point of view. The aim is to complement experiment by providing a realistic description of the mechanisms occurring on the atomic and nanometer scale. This is achieved by accurately accounting for the interactions between atoms within a quantum mechanical description of the electronic structure, based on density functional theory. Such approaches, sustained by high performance computers, permit the visualization of atomic processes, acting as genuine microscopes. With the advent of nanotechnologies, the spread of these techniques is nowadays growing worldwide, reaching research areas in physics, chemistry, biology, and materials science. Specific research projects concern the study of disordered materials and of oxide-semiconductor interfaces, which currently find applications in glass manufacturing and in microelectronic technology, respectively.

The course treats electromagnetic waves, including both geometrical optics and physical optics, and gives an introduction to quantum physics.

Computer simulation of physical systems I

The two main topics covered by this course are classical molecular dynamics and the Monte Carlo method.
close