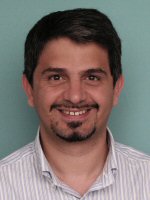 Amin Shokrollahi has worked on a variety of topics, including coding theory, computational number theory and algebra, and computational/algebraic complexity theory. He is best known for his work on iterative decoding algorithms of graph based codes, an area in which he holds a number of granted and pending patents. He is the co-inventor of Tornado codes, and the inventor of Raptor codes. His codes have been standardized and successfully deployed in practical areas dealing with data transmission over lossy networks.

Prior to joining EPFL, Amin Shokrollahi has held positions as the chief scientist of Digital Fountain, member of the technical staff at Bell Laboratories, senior researcher at the International Computer Science Insitute in Berkeley, and assistant professor at the department of computer science of the university of Bonn. He is a Fellow of the IEEE, and he was awarded the Best Paper Award of the IEEE IT Society in 2002 for his work on iterative decoding of LDPC code, the IEEE Eric Sumner Award in 2007 for the development of Fountain Codes, and the joint Communication Society/Information Theory Society best paper award of 2007 for his paper on Raptor Codes.


Amin Shokrollahi's research is supported by the Swiss National Science Foundation, and by Digital Fountain Corporation.