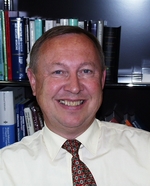 Upon his return in 1965 to the Institute of Inorganic and Analytical Chemistry at the University of Lausanne, he was asked to create a research and teaching program in Coordination Chemistry. He was appointed Assistant Professor in 1971.

In 1973, the Swiss Chemical Society awarded him the Werner Prize and Medal for his research on the structure, the stability and the dynamics of metal halogen adducts by NMR and, the same year, was nominated Professor of Inorganic and Analytical Chemistry.

He was a member of the Swiss National Foundation for Scientific Research in the division of Mathematics, Natural Sciences and Engineering from 1985 until 1996. He represents Switzerland on the COST Chemistry Technical Committee (European Co-operation in the Field of Scientific and Technical Research: 35 countries and 1000 research groups in chemistry) and has chaired this Committee from 1998 to 2000. He was the Chairman of the Management Committee of the COST Action D6 on Chemical Processes and Reactions under Extreme or Non-Classic Conditions (1992-1997).
He has organised the XXIXth International Conference in Coordination Chemistry (ICCC) in Lausanne in 1992. He has been awarded an honoris causa doctorate from the Lajos Kossuth University of Debrecen (Hungary) in 1993 for his work on elucidating reaction mechanisms in coordination chemistry utilising high pressure NMR. He has been called at the presidency of the Swiss Chemical Society (2001-2004). The University of Geneva awarded him an honoris causa doctorate in 2003.