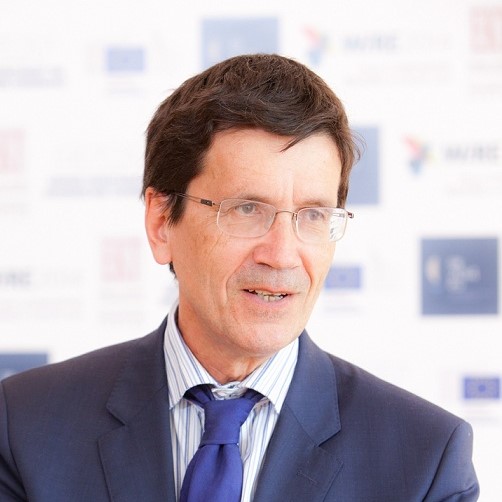 In this section, I describe my main current research topics and my main recent publications as well as some works in progress related to each of these topics

*SMART SPECIALISATION AND INNOVATION POLICIES IN THE EU AND BEYOND

-"Smart specialisation strategies as a case of mission oriented policy - a case study on the emergence of new policy practices, Industry and Corporate Change, 2018

-"Smart specialisation: the concept", Knowledge for growth, prospects for science, technology and innovation, ERA, EUR 24047, Brussels, with P.A.David and B.Hall, 2009

An important aspect of my work on this topic involves the preparation and development of a 12 weeks EPFL MOOC for executive education on "designing smart specialisation strategies" - in collaboration with BAKeconomics (Basel, CH).

-"Can medical products be developed on a not-for-profit basis? Exploring product development partnerships for neglected diseases", Science and Public Policy, with V.Munoz, F.Visentin and P.Gaulé, 2014

-"The emergence of educational tool industry : opportunities and challenges for innovation education", Research Policy, with J.Raffo, 2014

-"Structuring a policy response to a 'Grand Challenge'", Knowledge for Growth, prospects for science, technology and innovation, ERA, EUR 24047, Brussels, 2009

-Building the capacity to experiment in schools: a case study of the Institute of Educational Sciences in the US Department of Education", Economics of Innovation and New Technology, vol.16, 5, with T.Coock, 2007

-Randomized trials of education and medical practices: strengths and limitations, Economics of Innovation and New Technology, vol.16, 5, with R.Murnane and R.Nelson, 2007

"The formation of Coasean institutions to provide complementary capabilities for innovation - a case study and a statistical analysis about current trends in Switzerland, draft, with Martin Woerter, 2020

-"An assessment of the Innovation Union Scoreboard as a tool to analyse national innovation capacities: the case of Switzerland", Research Evaluation, with H.Hollanders, 2015

-"Why is it so difficult to translate innovation economics into useful and applicable policy prescriptions?", in The rate and direction of inventive activity revisited, Lerner and Stern eds., National Bureau of Economic Research, The University of Chicago Press, 2012

-"From transfer of technology to innovation : the centrality of the discovery process and economic knowledge", chapter 7, in Transfer of Technology and Knowledge Sharing for Development, UNCTAD, Geneva: United Nations, 2014


*ECONOMICS OF KNOWLEDGE AND THE KNOWLEDGE ECONOMY

- "The challenge of innovation in turbulent time", World Economic Forum paper, with E.Phelps, 2014

- "Patent-free innovation: a review of economic works including the analysis of a recent work in the field of experimental economics", Revue Economique, vol.64, 1, 2013

-"The fragility of experiential knowledge", in R.Arena, A.Festré and N.Lazaric (eds.), Handbook of Knowledge and Economics, Edward Elgar, 2012

-"The university research and public-private interactions", in B.Hall and N.Rosenberg (eds.), Handbook of Economics of Innovation, North Holland, with F.Lissoni, 2010

-"Structural changes in industrial R&D in Europe and the US", Science and Public Policy, 37(6), with S.Lhuillery, 2010

-"The economics of open technology: collective organization and individual claims in the 'fabrique lyonnaise' during the old regime", Frontiers in the economics of innovation: essays in honour of P.A.David, Cheltenham: Edward Elgar, with L.Hilaire Perez, 2006

-"An introduction to the economy of knowledge society", International Social Science Journal, 171, with P.A.David, 2002

-"On the economics of social innovation : a conceptual Framework and first empricial study", Innovation - Organization & Management, with A.Cuntz and E.Mostovova, 2020

-"Enriching the indicator base for the economics of knowledge", in Science, Technology and Innovation Indicators, Paris: OECD, 87-100, 2007

-"Pitfalls in estimating the returns to corporate R&D using accounting data", Knowledge for Growth, IPTS-EC/Sevilla, with B.Hall and J.Mairesse, 2007

-"The future of the EU as an inclusive and sustainable innovation economy", D.Foray & G.Romme (leading authors), position paper co-signed by 12 Eurotech Professors in innovation and entrepreneurship, Eurotech Alliance, April 2016

I am Full Professor at the Ecole Polytechnique Fédérale de Lausanne (EPFL) and hold the Chair of Economics and Management of Innovation (CEMI).

From 2007 to 2015, I served as a member of the Swiss National Research Council (Division IV - Large Scale Programs)

From 2008 to 2011, I served as chairman of the expert group Knowledge for Growth; a group of prominent economists created to advise Commissioner J. Potocnik (European Commission, DG research). This is during this service as member of this Group that I developed the concept of smart specialisation (together with P.A.David and B.Hall) that is now a key policy mechanism of the EU (cohesion policy).

My expertise includes the economics of innovation and knowledge and the economic policy implications of the new knowledge-based economy. I have presented many opening speeches and key note address in academic and policy conferences on these topics. I have written numerous academic papers as well as two books and have edited several books and special issues in these fields. Among these books,I like to highlight :

Since 2017, I regularly contribute to the Swiss Science Council blog: https://blog.wissenschaftsrat.ch/

- I received my Ph.D. in economics in 1984 and my "habilitation à diriger des recherches" in 1992 from the University Lumière of Lyon.
- In 1985, I joined the Centre National de la Recherche Scientifique (CNRS) as a Research Fellow in economics.
- In 1990, I joined the Ecole Centrale de Paris as professor of economics, and taught in the program ingénieur économiste.
- In 1993, I was nominated as Research Director at CNRS and joined the Institut pour le Management de la Recherche et de l'Innovation (IMRI) of the University of Paris-Dauphine.
- In 2001-2004, I worked as a Principal Analyst at the Center for Education, Research and Innovation of OECD (Paris).
- I joined the EPFL as Professeur Ordinaire in 2004.

I was also elected as Research Fellow at ICER (International Center for Economic Research) in Turin, at the Wissenschaftskolleg in Berlin and at IIASA in Laxenburg; and I was Invited Professor at the Universities of Santiago de Compostela, Torino and Padova.

I have done consulting work for the UNESCO, the OECD, WIPO, UNCTAD, UN/ECE, the European Commission, the Swiss Government and other public organisations. I am currently strongly involved into the "smart specialisation" debate in Europe, giving talks and providing advices in many countries and regions in Europe.

D. Foray : From transfer of technology to innovation : the centrality of the discovery process and economic knowledge. 2015.

D. Foray : Should we let the Genie out of the bottle? On the new industrial policy agenda and the example of smart specialisation; Scienze Regionali. 2015.

D. Foray : Common Innovation (how we create the wealth of nations) in the light of reflections on Mass Flourishing (how grassroots innovation created jobs, challenge, and change); Research Policy. 2015. DOI : 10.1016/j.respol.2015.04.006.

D. Foray : Patent-free Innovation: a review of economic works including the analysis of a recent work in the field of experimental economics; Revue Economique. 2013.

D. Foray : Why is it so difficult to translate innovation economics into useful and applicable policy prescriptions?; The rate and direction of inventing activity revisited; University of Chicago: National Bureau of Economic Research, 2012.

D. Foray : The knowledge and the rabbit: can we measure what is on the other side of the scales?; Güterabwägung bei der Bewilligung von Tierversuchen – Die Güterabwägung interdisziplinär kritisch beleuchtet; Zürich: Collegium Helveticum, 2011.

D. Foray; P. A. DAVID; B. H. HALL : Smart specialisation From academic idea to political instrument, the surprising career of a concept and the difficulties involved in its implementation. 2011.

D. Foray : A primer on patent and innovation; International Management. 2010.

D. Foray : Enriching the indicator base for the economics of knowledge; Science, Technology and Innovation Indicators in a Changing World. Responding to Policy Needs.; OECDpublishing, 2007. p. 87-100.

D. Foray : On the French system of innovation : between institutional inertia and rapid changes; Innovation Policies in Europe and the US: The New Agenda; Aldershot: Ashgate, 2003.

D. Foray : On the creation of fundamental knowledge: finding the right balance between the public and private domains; Economics, Law and Intellectual Property; Kluwer Academic Publishers, 2003.

D. Foray; R. Cowan : On the codifiability of knowledge : technical change and the structure of cognitive activities; Economics and information; Kluwer Academic Publishers, 2002.

D. Foray : New and old economics in the economy: a comment on K. Stiroh; Economic policy issues of the new economy; Heidelberg: Springer, 2002.

D. Foray : Intellectual property and innovation in the knowledge-based economy. 2000.

D. Foray; J.-P. Aubin : The emergence of network organizations in processes of technological choices: a viability approach; The Economics of Network; Springer, 1998.

D. Foray; R. Cowan : The economics of codification and the diffusion of knowledge; Industrial and Corporate Change. 1997.

D. Foray; A. Gruebler : Technology and the environment: an overview; Technological Forecasting and Social Change. 1996.

D. Foray; R. Cowan : Quandaries in the Economics of Dual Technologies and Spillovers from Military to Civilian Research and Development; Research Policy. 1995.

P. A. David; D. Foray : Accessing and expanding the science and technology knowledge base; STI Review. 1995.

Publishing in Management, Technology and Innovation

This year the course will be held at the University of St. Gallen from 4-5 June.

Economics of Innovation and Technological Change