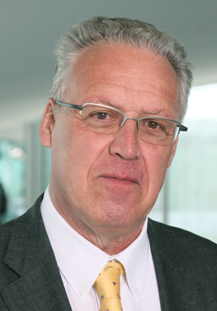 Born July 22, 1943, Francis-Luc Perret got his degree in Civil Engineering in 1967 from the Ecole Polytechnique Fédérale de Lausanne (EPFL) and his degree in Economics and Social Sciences in 1970 at the University of Lausanne. He followed his studies at the University of California at Berkeley where he received his Master of Business Administration (1973) and his Ph. D. in Management Science (1975). From 1976 to 1980, he is Professor of Management Science at the Institut Européen pour l'Administration des Affaires (INSEAD), and the Centre Européen d'Education permanente (CEDEP), in Fontainebleau (F). In 1981, he is appointed Professor in Logistics and Management at the EPFL, in 1986 he took the Direction of the Institute of Transports and Planning. He is currently Professor of Logistics and Management of Technology at EPFL, and developped intensive postgraduate programs, such as the Management of Logistics Systems, the Management of Technology and the Management of Technology Entreprise program with IMD. He is also Professor of Logistics Management at the Ecole Nationale des Ponts et Chaussées (ENPC) in Paris. He takes part as an expert in various national and international committees, such as the Board of ENPC and the french national research program PREDIT dedicated to transport and logistics. Prof. Francis-Luc Perret was President of the Expert Commission of the National Research Program 41 : Transportation and the Environment, interactions Switzerland-Europe, FNRS Division IV. Since 2000, he is Vice-President of EPFL, in charge of Human Resources, Finances and Constructions. He contributed to introduce extensively the PPP approach and collaboration for large projects, such as the Congress Center, the Housing for students and the Health care and Hospitalization.