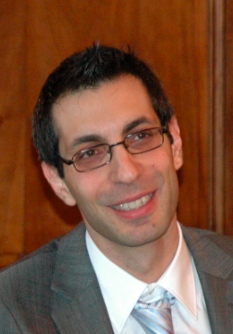 My vision in teaching mathematics is to provide simple explanations for complex concepts. I also like to explain mathematical theories using analogy and comparison with everyday's life situations.

My goal is to give a broader approach to mathematics, that is not only focused on particular topics (like geometry, analysis, etc.) but that is also devoted to the study of the existing bridges between the different areas of study.

My current work at EPFL is fully dedicated to teaching mathematics for 1st year students.

It is very important to give satisfactory introductory courses to first year students: future engineers need solid basis in mathematics and that is the purpose of my courses.

I also share with passion my vision of mathematics which is a beautiful tool for expressing elaborate constructions.

My main research interest is in Category Theory and its generalizations to higher dimensions. This branch of mathematics has the potential to be applied to all kind of science. It even has an entry in the Stanford Encyclopedia of Philosophy:

"Category theory has come to occupy a central position in contemporary mathematics and theoretical computer science, and is also applied to mathematical physics. Roughly, it is a general mathematical theory of structures and of systems of structures. As category theory is still evolving, its functions are correspondingly developing, expanding and multiplying. At minimum, it is a powerful language, or conceptual framework, allowing us to see the universal components of a family of structures of a given kind, and how structures of different kinds are interrelated. Category theory is both an interesting object of philosophical study, and a potentially powerful formal tool for philosophical investigations of concepts such as space, system, and even truth. It can be applied to the study of logical systems in which case category theory is called "categorical doctrines" at the syntactic, proof-theoretic, and semantic levels. Category theory is an alternative to set theory as a foundation for mathematics. As such, it raises many issues about mathematical ontology and epistemology. Category theory thus affords philosophers and logicians much to use and reflect upon. [...]"

To quote one of my favorite mathematicians:

"In the years between 1920 and 1940 there occurred, as you know, a complete reformation of the classification of different branches of mathematics, necessitated by a new conception of the essence of mathematical thinking itself, which originated from the works of Cantor and Hilbert. From the latter there sprang the systematic axiomatization of mathematical science in entirety and the fundamental concept of mathematical structure. What you may perhaps be unaware of is that mathematics is about to go through a second revolution at this very moment. This is the one which is in a way completing the work of the first revolution, namely, which is releasing mathematics from the far too narrow conditions by 'set'; it is the theory of categories and functors, for which estimation of its range or perception of its consequences is still too early..." (Jean Dieudonné, 1961)

We study the fundamental concepts of analysis, calculus and the integral of real-valued functions of a real variable.

This course aims at giving the basic mathematical knowledge needed for architecture studies in an engineering school. It covers the usual topics studied by engineers, but without going into the deepest areas, while illustrating concepts with applications ...