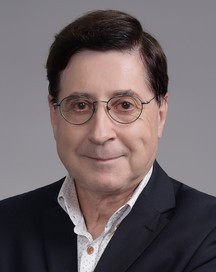 
The laboratory of Lanthanide Supramolecular Chemistry has two main objectives.
- The first, and general, one is to decipher the relationship between
luminescent properties and molecular structure of lanthanide-containing
coordination compounds and supramolecular edifices.
- The second one is to develop luminescent probes for biomedical analyses and
cancerous cell/tissue imaging, emitting either in the visible spectral range or in
the near infrared.


Jean-Claude Bünzli was born in 1944. He earned a degree in chemical engineering in 1968 and a PhD in 1971 (Swiss Federal Institute of Technology, Lausanne) for his work on the kinetic behaviour of Nb and Ta pentachloride adducts. He spent two years at the University of British Columbia as a teaching postdoctoral fellow (photoelectron spectroscopy) and one year at the Swiss Federal Institute of Technology in Zürich (physical organic chemistry).

He was appointed assistant-professor at the University of Lausanne in 1974 and started a research program on the spectrochemical properties of f-elements. He was promoted as a full professor of inorganic and analytical chemistry in 1980. He transferred to EPFL in 2001 where he directed the Laboratory of Lanthanide Supramolecular Chemistry until 2010.
From 2009 to 2013, he was World Class University Professor at Korea University (South Korea) helping developing a new research center for photovoltaics. In 20154-2015 he acted as visiting professor at FJIRSM (Fuzhou, Fujian), a laboratory of the Chinese Academy of Sciences.
He presently holds the Dr Kennedy Wong Distinguished Visiting Professorship at Hong Kong Baptist University (3 months/year) and a position as Distinguished Scholar at University of Technology, Sydney (NSW, Australia, 1 month/year).

He acted as the elected Dean of the Faculty of Sciences (1990-1991) and as one of the elected Vice-Rectors of the University (1991-1995), in charge of students' affairs and of research programs in the field of biomedical sciences. He held a position of invited professor at the Université Louis Pasteur, Strasbourg in 1996 and at the Science University of Tokyo in 1998. In 1989, he founded the European Rare Earths and Actinide Society which coordinate international conferences in the field (cf. http://ereswww.epfl.ch).

He served as a World Bank Project Specialist within the framework of the Chinese Provincial Universities Development Project (Northwest China, 1989) and as a member of a Panel in charge of evaluating chemical research at Norwegian universities (1997). In 2001, he was hired as "Peer leader" for the evaluation of the Swiss universities of applied sciences. In 2005, he acted as a member of the "Physical Inorganic Panel" of the Science Foundation of Ireland and in 2006 he was nominated to the "Chemistry Panel" of the same foundation.

He is a member of the Editorial Board of Spectroscopy Letters, associate editor-in-chief of the Journal of Rare Earths, and senior editor of the Handbook on the Physics and Chemistry of Rare Earths (54 volumes published to date).

Regarding teaching, he has directed the joint project of the universities of Geneva, Lausanne, Neuchâtel and Fribourg "General chemistry for students enrolled in a life sciences curriculum", within the frame of the "Swiss virtual campus", a program sponsored by the Conference of Swiss universities and the Swiss federal office for science and education (2000-2004). Web site: http://chimge@epfl.ch

His research is centered on lanthanide luminescent molecular and supramolecular edifices, with main applications in biology & medicine. He is the author or the co-author of 350 research papers, 260 contributed communications and has presented 285 invited conferences, seminars, and courses. He has collected >22800 citations (h-index 72).

C. Steve; D. Imbert; C. D. B. Vandevyver; J.-C. G. Bunzli : A Novel Strategy for the Design of 8-Hydroxyquinolinate- Based Lanthanide Bioprobes That Emit in the Near Infrared Range; Chemistry - A European Journal. 2007.

C. Steve; D. Imbert; C. D. B. Vandevyver; J.-C. G. Bunzli : A Novel Strategy for the Design of 8-Hydroxyquinolinate- Based Lanthanide Bioprobes That Emit in the Near Infrared Range; Chemistry - A European Journal. 2007.