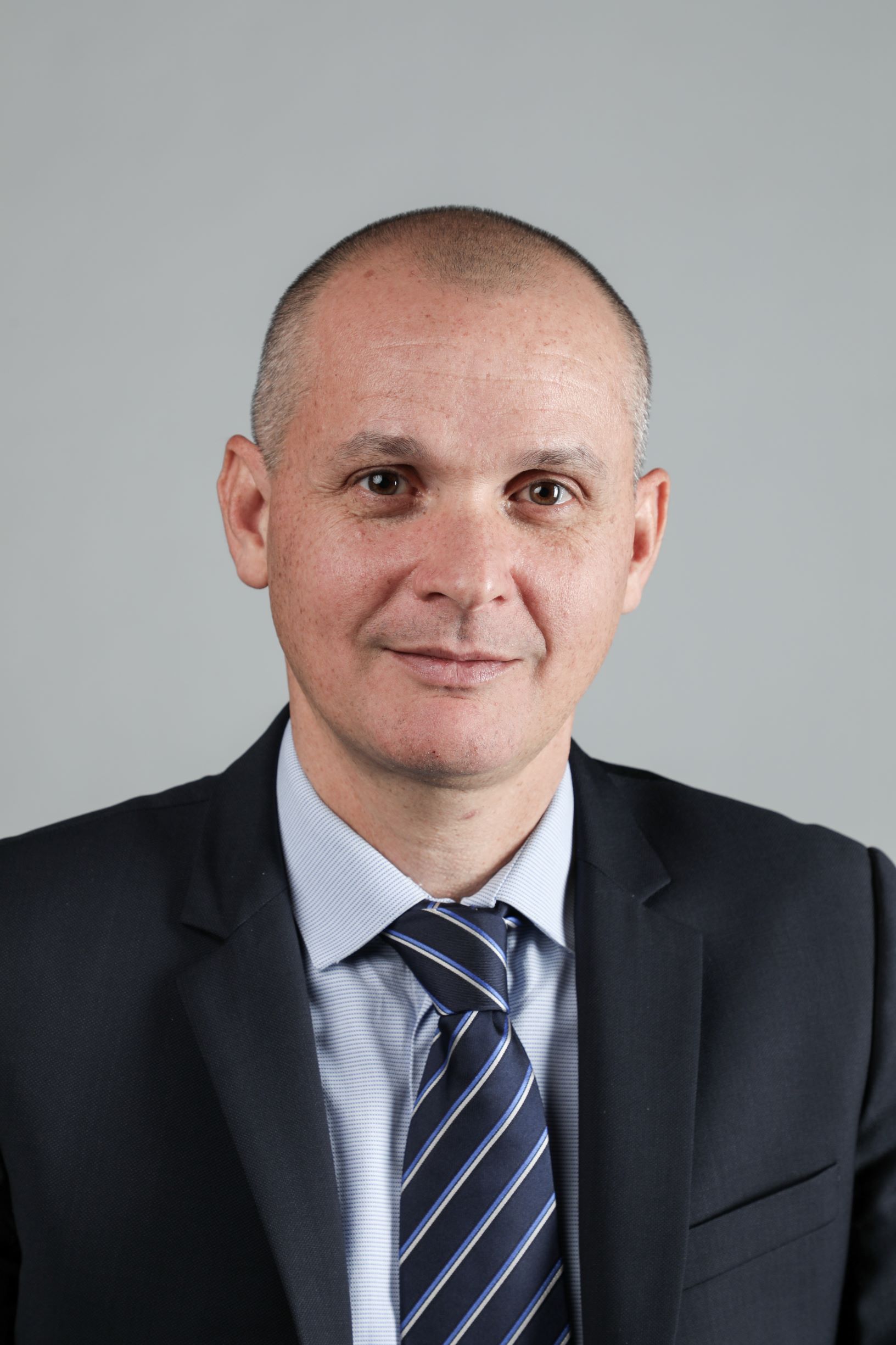 Professor J.F. Molinari is the director of the Computational Solid Mechanics Laboratory (http://lsms.epfl.ch) at EPFL, Switzerland. He holds an appointment in the Civil Engineering institute, which he directed from 2013 to 2017, and a joint appointment in the Materials Science institute. He started his tenure at EPFL in 2007, and was promoted to Full Professor in 2012. He is currently an elected member of the Research Council of the Swiss National Science Foundation in Division 2 (Mathematics, Natural and Engineering Sciences).

J.F. Molinari graduated from Caltech, USA, in 2001, with a M.S. and Ph.D. in Aeronautics. He held professorships in several countries besides Switzerland, including the United States with a position in Mechanical Engineering at the Johns Hopkins University (2000-2006), and France at Ecole Normale Supérieure Cachan in Mechanics (2005-2007), as well as a Teaching Associate position at the Ecole Polytechnique de Paris (2006-2009). He received an  ERC Starting Grant award in 2009.

The work conducted by Prof. Molinari and his collaborators takes place at the frontier between traditional disciplines and covers several length scales from atomistic to macroscopic scales. Over the years, Professor Molinari and his group have been developing novel multiscale approaches for a seamless coupling across scales. The activities of the laboratory span the domains of damage mechanics of materials and structures, nano- and microstructural mechanical properties, and tribology.

Prof. Molinari is involved in teaching at EPFL at the Bachelor, Master and Doctoral levels.
In the Fall semester, he is teaching "Continuum Mechanics" (BA 3), and "Selected Topics in Mechanics of Solids and Structures" (MAS 1+3, OPT), which includes an introduction to Wave Dynamics and to Fracture Mechanics. This Master class is taught in alternate years with Advances in Computational Solid Mechanics (MAS 1+3, OPT).
In the Spring semester, Prof. Molinari is teaching "Finite Elements" (BA 6).

D. S. Kammer, V. Yastrebov, G. Anciaux and J.-F. Molinari. The existence of a critical length scale in regularised friction., accepted in Journal of the Mechanics and Physics of Solids, 2013.

F. Gatuingt, L. Snozzi and J.-F. Molinari. Numerical determination of the tensile response and the dissipated fracture energy of concrete: role of the meso-structure and in?uence of the loading rate, accepted in International Journal for Numerical and Analytical Methods in Geomechanics, 2013.

Tamaas: a library for elastic-plastic contact of periodic rough surfaces

Crack front waves: A 3D dynamic response to a local perturbation of tensile and shear cracks

The emergence of crack-like behavior of frictional rupture: Edge singularity and energy balance

Emergence of Cracklike Behavior of Frictional Rupture: The Origin of Stress Drops

Tribology from the nano to the mesoscale (invited keynote)

Adhesive wear mechanisms in the presence of weak interfaces: Insights from an amorphous model system

Is friction fracture? When, where and how? (invited keynote speaker)

The origin of stress drops in frictional rupture (invited speaker)

Adhesive wear mechanisms in the presence of weak interfaces

Adhesive wear mechanisms in the presence of weak interfaces

Shock waves produced by the interaction of dynamic crack with heterogeneities

Asperity-Level Origins of Transition from Mild to Severe Wear

Origins of adhesive wear (Invited Talk and Chair of minisymposium)

A mechanistic understanding of the wear coefficient: From single to multiple asperities contact

The Coupled Atomistic/Discrete-Dislocation method in 3d part I: Concept and algorithms

Modeling and simulation in tribology across scales: An overview

Influence of heterogeneities on crack propagation

Jean-François Molinari interviewed on the RTS

Modeling Creeping Flow through a Closed Crack with a Self-Affine Geometry and an Extension to Permeability of Cracked Media, Poromechanics VI

Interplay between Process Zone and Material Heterogeneities for Dynamic Cracks

On the debris-level origins of adhesive wear

Damage cluster distributions in numerical concrete at the mesoscale

A mesoscale fracture model for concrete

Achard got it right: insights from a cohesive model (invited workshop)

Efficient approximation of the contact area between rough surfaces

Effects of residual stresses on the tensile fatigue behavior of concrete

The dynamic rupture of interfaces made of heterogeneous fracture properties

Avalanches in dry and saturated disordered media at fracture

Dynamic fragmentation of brittle materials, insights from a numerical model

Modeling of frictional sliding and slip precursors; analogies between friction and fracture

Archard got it right: insights from a cohesive model

Wear at the asperity level: An atomistic viewpoint

Microscopic origins of wear process from an atomistic model

A numerical study of the contact between rough surfaces: mechanical and transport phenomena at small scales

Toward demystifying the Mohs Hardness Scale

Numerical analysis of the effects of residual stresses in concrete

The role of elastic waves during dynamic rupture of heterogeneous interfaces

Dynamic crack propagation in a heterogeneous ceramic microstructure, insights from a cohesive model

Dynamic crack propagation in a heterogeneous ceramic microstructure, insights from a cohesive model

The role of viscoelasticity on heterogeneous stress fields at frictional interfaces

Direct coupling between molecular dynamics and continua: a thermo-mechanical approach

A study of friction in dynamic fracture along bimaterial interfaces

Predicting the length of slip precursors

A study of frictional contact in dynamic fracture along bimaterial interfaces

The existence of a critical length scale in regularised friction

Rough on rough sliding at the nanoscale with molecular dynamics

Coupling Molecular dynamics to a continuum in LibMultiScale: how to address thermal and dislocation issues.

Investigation of the lubricated sliding friction of nano-scale rough surfaces.

Investigation of the lubricated sliding friction of nano-scale rough surfaces.

Role of visco-elastic rheologies in the persistence of heterogeneous stress distributions in dynamic rupture models.

Specification of a micro-transgranular fracture parameter

Direct Visualization of Single Ions in the Stern Layer of Calcite

Relations between roughness, temperature and dry sliding friction at the atomic scale

Insights into the thermo-mechanics of orthogonal nanometric machining

Numerical determination of the tensile response and the dissipated fracture energy of concrete: role of the meso-structure and inﬂuence of the loading rate

Coupling Atomistics and Discrete Dislocations in 3D: A Start

Friction from the atomic to the continuum scales

Spatial filters for coupling MD with FE at finite temperatures.

Explicit non-local damage computations in dynamics: on the importance of the choice of the non-local variable.

Friction at the tool-chip interface during orthogonal nanometric machining

Dynamic fragmentation of a brittle plate under biaxial loading: strength or toughness controlled?

Interfaces: How the Rupture Speed of Slip Fronts is Related to the Deformation Energy

On the Propagation of Slip Fronts at Frictional Interfaces

Normal contact between rough surfaces by the Discrete Element Method

The effect of loading on surface roughness at the atomistic level

Linking Discrete Dislocations and Molecular Dynamics in 3D: a Start

Exploring The Physics Of Dynamic Fragmentation Through High-Performance Computing

How the obscuration-zone hypothesis affects fragmentation: Illustration with the cohesive-element method

Obscuration Zones and Secondary Waves Effects. A Numerical Study of Their Influence with the Cohesive Elements Method

Dry sliding contact between rough surfaces at the atomistic scale

On the Initiation of Dynamic Sliding

The autocorrelation function for island areas on self-affine surfaces

Optimum energy of the fragmentation of kidney stones by direct impact

Dynamic fragmentation of ceramics, signature of defects and scaling of fragment sizes

Modeling of the fragmentation by Discrete Element Method

Contact mechanics at the nanoscale, a 3D multiscale approach

Analysis of the brittle fragmentation of an expanding ring

Effects of material properties on the fragmentation of brittle materials

Atomistic based continuum investigation of plastic deformation in nanocrystalline copper

Micromechanics of deformation of metallic-glass?matrix composites from in situ synchrotron strain measurements and finite element modeling

A study of solid-particle erosion of metallic targets

A detailed sypnosis can be read at lsms.epfl.ch

This class addresses Continuum Mechanics, which is fundamental component of the civil engineering curriculum. It covers the concepts of deformation, stress, general principles, equilibrium equations, and constitutive laws.

Numerical modelling of solids and structures

The course offers the opportunity to gain practical experience in the characterization of fiber reinforced polymer and manufacturing/production methods for composite structures. The material is presented by lectures and visits to the laboratory. This is mainly a project based - hands on course

Selected topics in mechanics of solids and structures

The class covers the fundamentals of wave dynamics and fracture mechanics. The aim is to deepen their knowledge in advanced topis in mechanics of solids and structures and discuss current research topics. Case studies on catastrophic failure will be presented and discussed in class.

This reading class will meet every Friday afternoon to discuss the book of Christopher Scholz (one chapter every two weeks). Class discussions will emphasize a mechanistic understanding of geophysical phenomena, with in depth discussions of fracture mechanics, and friction/wear processes.

This course is intended to give to the participants (graduates, researchers and industrial professionals) a solid background in tribology and surface interactions. It covers the fundamentals concepts of tribology including surfaces, contact mechanics, friction, lubrication and wear.
close