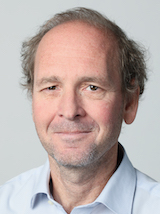 Marc is also passionate about pedagogy and, in particular, interdisciplinarity and experiential learning. He explores different scenarios to raise students' awareness to the importance of emerging markets. In this framework he launched in 2015 the China Hardware Innovation Camp (CHIC).

He is in charge of the "China" stream for the Minor in "Science, Technology and Area Studies" (STAS)


Marc is a scientist and lecturer at the Swiss Federal Institute of Technology (EPFL) and at the University of Lausanne (HEC).

Marc obtained his PhD on China's telecommunication reforms from the London School of Economics. He holds a Master Degree in International Management (HEC, 1997) and an undergraduate degree in Business Management from the University of Lausanne (1993). He studied Chinese Language and Economics for two years at Fudan University, Shanghai (1993-1995) and one semester at the Richard Ivey School of Business, University of Western Ontario, Canada (1996).

Marc was previously senior research associate at EPFL working on the coherence between institutional and technological governance in infrastructures (2007-2011). In a former life, he worked as a research analyst at Swiss Re and at McKinseys Business Technology Office. He served as deputy director and senior advisor to the Evian Group, a think tank based at IMD (Lausanne, Switzerland) and lectures regularly on China and emerging markets at undergraduate, graduate and executive levels.

Marc contributes frequently to Swiss media. He is the Founder and President of the bonopro association and recipient of the Swiss Re Civilian Service Prize (2011).

I. Bartle; M. Laperrouza : Systemic risk in the network industries: is there a governance gap?. 2009. 5th ECPR Conference, University of Potsdam, Germany, 10-12 September 2009.

M. Laperrouza : Deploying a pan-European railway standard in the era of liberalization: Lessons from the introduction of ERTMS in Switzerland. 2008. Building Networks for a Brighter Future. EURNEX - ZEL 2008, Zilina, Slovak Republic, June 4-5, 2008.

Makerspaces: politics and communities of innovation in contemporary China (2016-2019)

Funded by the SNSF, this project is lead with Dr. Florence Graezer Bideau (PI) in collaboration with Dr. Clément Renaud and Monique Bolli (IAGS, EPFL). It investigates the social, technical and commercial attributes of key Chinese makerspaces and their communities in several Chinese cities (Beijing, Shanghai, Chengdu and Shenzhen). While limited in size and scope, makerspaces and the maker movement in general offer a very rich environment to study much broader social, political and economic transformations taking place in contemporary China.

The project aims to shed light on how a bottom-up and autonomous movement responds to the co-opting of the State and to discuss the Chinese government’s plasticity and capacity to engage with emerging classes.

Funded by the Gebert Rüf Stiftung (2016-2017) and swissnex China, the CHIP project aims to scale the China Hardware Innovation Camp (CHIC) by making such a learning experience available to teams of students across academic institutions in Switzerland. Teams from Geneva, Fribourg and Ticino participate in the pilot (October 2016-September 2017).

The course raises awareness on the implications of China's emergence as an economic and technological power by developing a critical approach on the domestic and international challenges created by such a transition.

The course brings together students from EPFL and UNIL through an exploratory design approach. Students develop a solution through stages of research, ideation and validation. The solutions are developed through an iterative process.

The course addresses current issues through the lenses of history, political economy, technology or geopolitics. It fosters students' critical thinking on the globalisation process by integrating different levels of analysis as well as questions of alteri...

The course addresses current issues through the lenses of history, political economy, technology or geopolitics. It fosters students' critical thinking on the globalization process by integrating different levels of analysis as well as questions of alteri...

Introduction to project China I

The course prepares to the development of a prototype and its realisation in China. It develops competences related to project conception and management as well as team work.

The course prepares to the development of a prototype and its realisation in China. It develops competences related to prototype development, project management, team work and intercultural management.

The course concludes the development of the prototype of a connected device. It develops competences related to prototype development, project management, team work and intercultural management.