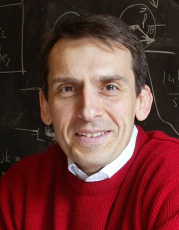 Marco Grioni was born in Milan (Italy) where he graduated in 1982. He has occupied research positions at Minneapolis (USA), Nijmegen (The Netherlands), Orsay (France) and Neuchâtel, where he became Privat Docent in Solid State Physics in 1994. Since 1996 he is at EPFL, where he teaches physics to undergraduate and graduate students. He is acting director of the Laboratory of Electron Spectroscopy of IPN, and an adjunct professor from 2005. His research interests concern the electronic properties of novel materials,namely high-temperature superconductors, low-dimensional metals, and heavy fermion compounds, which he investigates by high-resolution photoemission (ARPES), ultrafast time-resolved ARPES, and photon-in photon-out synchrotron-based spectroscopies. Author of approx. 220 scientific articles, he is actively involved in the development of new instruments. From 2003 to 2006 he was the chairman of the users organization of the European Synchrotron Radiation Facility (ESRF  Grenoble). Between 2010 and 2017 he served as chairman of the scientific advisory committee of the french national synchrotron light source SOLEIL