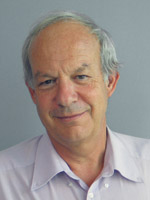 Applications of nonlinear dynamics and dynamical networks in engineering and biology

After a PhD and a postdoc in theoretical physics, Martin Hasler has pursued reasearch in electrical circuit and filter theory. His current interests are the applications of nonlinear dynamics in engineering and biology. In particular, he is interested in information processing in biological and technological networks. He is most well-known for his work in communications using chaos and in synchronization of networks of dynamical systems.

He joined EPFL in 1974, became a titular professor in 1984 and a full professor in 1998. In 2002, he was acting Dean of the School of Computer and Communication Sciences. He was elected Fellow of the IEEE in 1993. He was the general chair of ISCAS 2000 in Geneva. He was Associate Editor of the IEEE Transactions in Circuits and Systems from 1991 to 1993 and Editor-in-Chief from 1993 to 1995. He was elected vice-president for Technical Activities of the IEEE Circuits and Systems Society from 2002 to 2005. He is a member of the Research Council of the Swiss National Science Foundation.

BRACCIA: Detecting the depth of anesthesia from coupled oscillator models