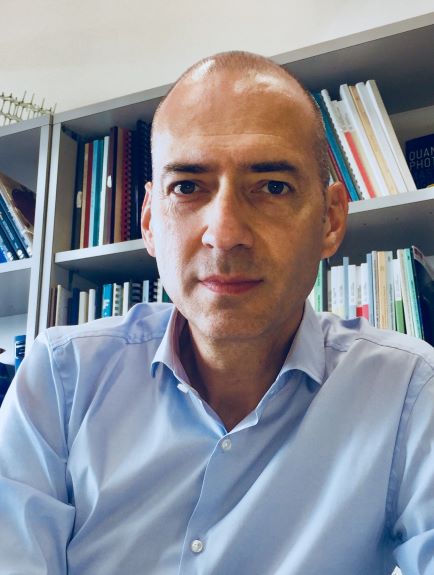 Exploring quantized structures based on emerging semiconductors in both photonics and electronics. This covers a broad research area starting from fundamental studies around light-matter interaction in microcavities and nanostructures, to photonic devices such as blue lasers and  light emitting diodes.

Nicolas Grandjean received a PhD degree in physics from the University ofNice Sophia Antipolis in 1994 and shortly thereafter joined the French National Center for Scientific Research (CNRS) as a permanent staff member. In 2004, he was appointed tenure-track assistant professor at the École polytechnique fédérale de Lausanne (EPFL) where he created the Laboratory for advanced semiconductors for photonics and electronics. He was promoted to full professor in 2009. He was the director of the Institute of Condensed Matter Physics from 2012 to 2016 and then moved to the University of California at Santa Barbara where he spent  6 months as a visiting professor. Since 2018, he is the head of the School of Physics at the EPFL. He was awarded the Sandoz Family Foundation Grant for Academic Promotion, received the “Nakamura Lecturer” Award in 2010, the "Quantum Devices Award” at the 2017 Compound Semiconductor Week, and “2016 best teacher” award from the EPFL Physics School. His research interests are focused on the physics of nanostructures and III-V nitride semiconductor quantum photonics.

Give the student the basic notions that will allow him or her to have a better understanding of physical phenomena, such as the mechanics of point masses. Acquire the capacity to analyse quantitatively the consequences of these effects with appropriate theoretical tools.

Series of lectures covering the physics of quantum heterostructures (including quantum dots), microcavities and photonic crystal cavities as well as the properties of the main light emitting devices that are light-emitting diodes (LEDs) and laser diodes (LDs).

This course offers an insight into the science of epitaxial growth, a chapter of surface science requiring basic understanding of thermodynamics, crystallography, electronic and optical properties of semiconductors.
close