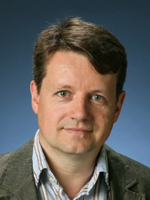 Patrick Thiran is a full professor in network and systems theory at the School of Computer and Communication Sciences at EPFL. He holds an electrical engineering degree from the Université Catholique de Louvain, Louvain-la-Neuve, Belgium, an M.Sc. degree in electrical engineering from the University of California at Berkeley, USA, and he received the PhD degree from EPFL, in 1996. He became an adjunct professor in 1998, an assistant professor in 2002, an associate professor in 2006 and a full professor in 2011. He was with Sprint Advanced Technology Labs in Burlingame, California, in 2000-01. His research interests are in communication and social networks, performance analysis and stochastic models. He is currently active in the analysis and design of wireless and PLC networks (scaling laws, medium access control), in network monitoring (network tomography, multi-layer networks), and data-driven network science. He also contributed to network calculus and to the theory of locally coupled neural networks and self-organizing maps. He served as an associate editor for the IEEE Transactions on Circuits and Systems in 1997-99 and for the IEEE/ACM Transactions on Networking in 2006-10. He is currently on the editorial board of the IEEE Journal on Selected Areas in Communication. He is/was on the program committee of different conferences in networking, including ACM Sigcomm, Sigmetrics, IMC, CoNext and IEEE Infocom. He was TPC chair of AMC IMC 2011 and CoNext 2012. He is a Fellow of the Belgian American Educational Foundation and of the IEEE. He received the 1996 EPFL Doctoral Prize and the 2008 Crédit Suisse Teaching Award.

The Role of Adaptivity in Source Identification with Time Queries

Disparity Between Batches as a Signal for Early Stopping

War of Words: The Competitive Dynamics of Legislative Processes

Geometry of adversarial robustness of deep networks: methods and applications

Learning Hawkes Processes from a Handful of Events

A General Framework for Sensor Placement in Source Localization

On the Delays in Time-Varying Networks: Does Larger Service-Rate Variance Imply Larger Delays?

Localizing the Source of an Epidemic Using Few Observations

Csma/ca in time and frequency domains

The effect of transmission variance on observer placement for source-localization

Back to the Source: an Online Approach for Sensor Placement and Source Localization

Blowing in the Wind

From data to structures

Observer Placement for Source Localization: the Effect of Budgets and Transmission Variance

Where You Are is Who You Are: User Identification by Matching Statistics

Electri-Fi Your Data: Measuring and Combining Power-Line Communications with WiFi

CSMA/CA in Time and Frequency Domains

The Beauty of the Commons: Optimal Load Sharing by Base Station Hopping in Wireless Sensor Networks

Method, apparatus and computer program product for locating a source of diffusion in a network

Simulator and Experimental Framework for the MAC of Power-Line Communications

Analyzing and Boosting the Performance of Power-Line Communication Networks

On the MAC for Power-Line Communications: Modeling Assumptions and Performance Tradeoffs

Privacy-Preserving Function Computation by Exploitation of Friendships in Social Networks

Where to go from here? Mobility prediction from instantaneous information

The Entropy of Conditional Markov Trajectories

A novel encapsulation device for peripheral implantation of antibody-secreting cells

Locating the Source of Diffusion in Large-Scale Networks

A Measurement-Based Algorithm to Maximize the Utility of Wireless Networks

The goal of this class is to acquire a working knowledge of the tools of random processes used by an engineer in communication, data science and computer science.

Linear and nonlinear dynamical systems are found in all fields of science and engineering. After a short review of linear system theory, the class will explain and develop the main tools for the qualitative analysis of nonlinear systems, both in discrete-time and continuous-time.
close