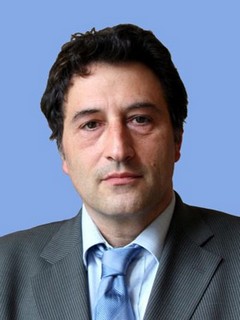 Philippe GILLET completed his undergraduate studies in Earth Science at Ecole normale supérieure de la rue dUlm (Paris). In 1983 he obtained a PhD in Geophysics at Université de Paris VII and joined Université de Rennes I as an assistant. Having obtained a State Doctorate in 1988, he became a Professor at this same university, which he left in 1992 to join Ecole normale supérieure de Lyon.

The first part of his research career was devoted to the formation of mountain ranges  particularly of the Alps. In parallel, he developed experimental techniques (diamond anvil cells) to recreate the pressure and temperature prevailing deep inside planets in the lab. These experiments aim at understanding what materials make up the unreachable depths of planets in the solar system.

In 1997, Gillet started investigating extraterrestrial matter. He was involved in describing meteorites coming from Mars, the moon or planets which have disappeared today and explaining how these were expelled from their original plant by enormous shocks which propelled them to Earth. He also participated in the NASA Stardust program and contributed to identify comet grains collected from the tail of Comet Wild 2 and brought back to Earth. These grains represent the initial minerals in our solar system and were formed over 4.5 billion years ago. He has also worked on the following subjects:

Philippe Gillet is also active in science and education management. He was the Director of the CNRS Institut National des Sciences de lUnivers (France), the President of the French synchrotron facility SOLEIL and of the French National Research Agency (2007), and the Director of Ecole normale supérieure de Lyon. Before joining EPFL he was the Chief of Staff of the French Minister of Higher Education and Research.