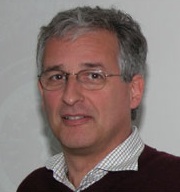 Pierre-André Farine received the Doctoral and Engineering Degrees in Microtechnology from University of Neuchâtel, Switzerland, respectively in 1984 and 1978, and the Engineering in Microtechnology from ETS Le Locle in 1974.
He was working 17 years for the Swiss watch industries (Swatch Group), including developments for high-tech products, such as pager watches, watches including integrated sensors such as pressure, compass, altimeter and temperature sensors for Tissot. He was also involved in prototypes developments for watches including GPS and cellular GSM phones.
Since 8 years, he is Professor in Electronics and Signal Processing at the Institute of Microtechnology IMT, University of Neuchâtel, Switzerland. Full professor at EPFL since January 1st, 2009, he works in the field of low-power integrated products for portable devices, including microelectronics for wireless telecommunications, UWB and GNSS systems. He is Head of the Electronics and Signal Processing Laboratory ESPLAB of the EPFL IMT-NE. His laboratory works also for video and audio compression algorithms and their implementation in low power integrated circuits.

2002-2008 Full Professor at the Institute of Microtechnology (IMT) University of Neuchâtel, in continuation with Prof. Nicolaas De Rooij's work.

Involve in the design and implementation of products and functional blocks for Swatch Group companies (in the field of CMOS integrated circuits, micro-engineering constructions interfaces, micromechanics and sensors).

Technical Watches and new developments in the fields of telecommunications and bio-medical electronics, including:

GPS Watch: Design and implementation of a GPS watch with analogical display using the watch hands to indicate the direction of a target, geographic north and the speed. Study and construction of micro-ribbons miniaturized antennas, high-frequency low-power receivers with CMOS and BiCMOS technology, and demodulation devices for dispreading spectrum with CMOS technology. Project Manager.

Tissot T-Touch: watch where all the functions are controlled by a capacitive touch screen and incorporating a sensor for pressure, an electronic compass and a temperature sensor to indicate, among other things: barometric pressure, altitude, weather forecasting, temperature and direction of magnetic north.

Watch Salto (ETA MecaQuartz): mechanical watch with the precision of a quartz watch (without battery or electrochemical accumulator).

Watch with quartz oscillator temperature compensated (VHP Longines, Omega): ETA Calibers 252,511 and 252,611, the new standard by the COSC (Swiss Official Chronometer Control) regarding the quartz watches (type IV). An improved accuracy of the quartz watch (10 seconds per year) has been accomplished within an extended temperature range (from 0-60 ° C).

Tissot Navigator: waterproof watch with time indication according to the selection of 24 different time zones. The indication of a time zone is obtained by rotating the watchs wheel.

Swatch Pager Watch: incorporating a HF or UHF type reseptor (Pocsag type) allowing the reception of messages ("pager" local call B in Switzerland, receiver frequency 147MHz, 466MHz in Germany and 900MHz in USA). We worked on HF and UHF and software for in this product.

Angiometer Nius2 (Omega Electronics): Study and realization of a medical device for measuring arterial compliance, diameter and thickness of arteries and their temporal variations. Work in collaboration with EPFL - MBL (Medical Engineering Laboratory) and the CHUV (Hypertension Division).

Quartz Gyrometer with crystal oscillator and micropump with MEMs technology: Development of electronic circuits for the control of these devices.

Video Finish (Longines): Study and realization of a videographic system for measurement of mobiles (video-finish). Mandate with Longines.