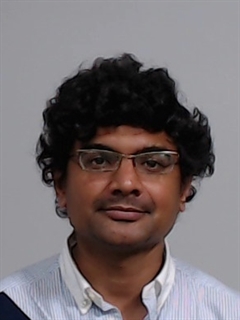 Dr. Srikanth Ramaswamy is a group leader and senior scientist in the Blue Brain Project. He leads a multidisciplinary group at the interface of experimental neurophysiology and large-scale computational modeling to investigate the organising principles of neuromodulatory mechanisms that shape neocortical network dynamics.

Srikanth graduated from the National Institute of Engineering in Mysore, India with a first class honours degree in Electrical engineering in 2002. In 2003, he was awarded a British Chevening scholarship by the Foreign and Commonwealth Office, UK for a master’s in Electrical power engineering at the University of Strathclyde in Glasgow, which he completed with commendable mention in 2004. During his master's, he developed a keen interest in neuroscience and won a scholarship by the Fundacíon BBVA in 2005 to work with Profs. Gonzalo de Polavieja and Pablo Varona at the Universidad Autonoma de Madrid to perform single unit recordings and calcium imaging in Leech neurons.

In 2006, he joined the Blue Brain Project at the EPFL as one of its first scientific team members and began working on his Ph.D. thesis under Prof. Dr. Henry Markram’s supervision. The Blue Brain Project is a Swiss flagship initiative to establish a facility for data-driven in silico reconstructions of brain regions.