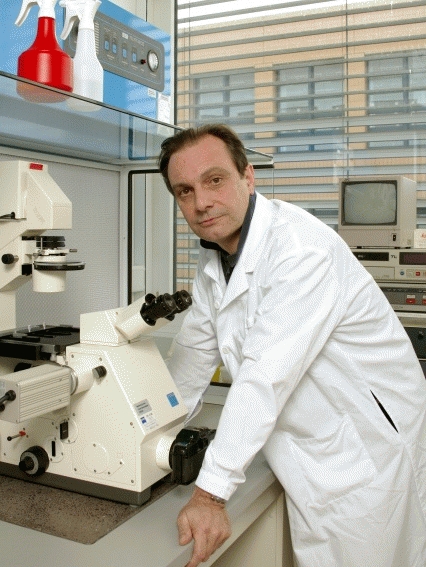 Yann Barrandon graduated in Medicine in Paris where he also trained as a dermatologist and completed his PhD on the long term cultivation of human haematopoietic stem cells in 1982 under the direction of Dr. Catherine Dresch (Centre Hayem, St Louis Hospital). He worked as a post-doctoral fellow (1982-1983) with Pr. Marvin Karasek in the Department of Dermatology at Stanford University CA, and then with Pr. Howard Green, a pioneer in cell therapy, in the Department of Molecular and Cellular Physiology at Harvard Medical School (1983-1990). During this period, he participated in the world's first transplantations of epidermal stem cells on extensive third degree wounds and contributed several seminal findings including the demonstration of stem cells in cultures of human keratinocytes (PNAS 1987), and that human keratinocyte stem cells could be efficiently transduced by retroviral vectors (Science 1987), in collaboration with Richard Mulligan at the Whitehead Institute for Biomedical Research (Massachussets Institute of Technology, Cambridge, USA). He has also participated to the transfer of the stem cell technology from Harvard University to a spin off biotechnology company, now part of Genzyme Corp.

He returned to France in 1990 as Director of Research at the INSERM and Head of Lab at the Ecole Normale Supérieure, Paris. During this period, he demonstrated the presence of multipotent clonogenic stem cells in hair follicles (Cell 1994, 2001) and successfully brought stem cells from bench to bedside demonstrating the usefulness of a fibrin matrix to transplant epidermal stem cells. (Transplantation, 2000). Following his move to Lausanne, Yann Barrandon has shown that oligopotent stem cells are present in the mammalian cornea (Nature 2008), challenging previous dogma. He has also contributed to the characterisation of several skin diseases (Nature Genetics, 1993a, 1993b, 2000, 2005) and towards gene therapy of dystrophic epidermolysis bullosa. He is a partner in several EEC stem cell consortia (FP6: Therapeuskin and EuroStemCell, FP7: EuroSyStem, OptiStem, BetaCellTherapy).

Current research targets the role of small microenvironmental variations on stem cell behavior, and exploring the potency of stem cells of stratified epithelia (skin, esophagus, ocular surface) and of thymic epithelial cells. The lab is also involved in understanding the factors that regulate stem cell engraftment to improve epithelial cell therapy. An important aspect of the research aims at setting up a pilot clinical trial to demonstrate the feasibility of ex vivo gene therapy to treat Dystrophic Epidermolysis Bullosa, a rare but horrendous congenital disease of the skin that results in continuous blistering of the skin, chronic wounds, fusion of fingers and development of carcinoma.

He organized the second EuroStemCell international conference Advances in Stem Cell Research supported by the EMBO and held in Lausanne 8-10 September 2006. He regularly participates as faculty to the EEC funded Stem Cell Summer School held in Hydra Greece since 2005.