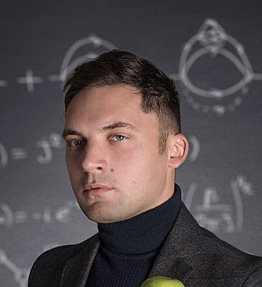 Alexander Kruchkov was born in Luhansk*, Ukraine in 1989. He received his physical education through the Landau School for Theoretical Physics at University of Kharkiv, Ukraine. He further joined EPFL where he has completed his Ph.D. in Physics (2017), specializing on computational condensed matter. Since 2017, Dr. Kruchkov has performed his postdoctoral training at Harvard University (Subir Sachdev group). In 2020, Dr. Kruchkov has been awarded with the Branco Weiss Grant from ETH Zürich, to perform research on flat bands, strong interactions, and the SYK physics jointly at EPFL (LQM) and Harvard University (Kim Lab @ Harvard). As of 2022, Alexander Kruchkov has moved to Lausanne to start his team at EPFL, and he remains affiliated with Harvard University as an Associate of the Department of Physics.

Alexander Kruchkov is a PI on the Branco Weiss Grant, dedicated to flat electronic bands, strong interactions and the SYK model.

This lecture gives an introduction to Solid State Physics, namely to their crystal and electronic structure, their magnetic properties, as well as to their thermal and electric conductance. The level is that of the book by Ashcroft & Mermin. The lecture is for Physics Students in their 3rd year

Twisted Bilayer Graphene (TBG) is a change of paradigm in condensed matter: with flat topologic bands, it provides a platform for unconventional superconductivity, correlated insulation, Plankian metal phase, etc. This course will provide rigorous yet pedagocical introduction to the topic.
close