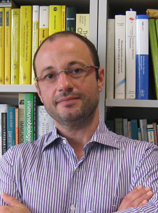 Dr. Vassily Hatzimanikatis is currently Associate Professor of Chemical Engineering and Bioengineering at Ecole Polytechnique Federale de Lausanne (EPFL), in Lausanne, Switzerland. Vassily received a PhD and an MS in Chemical Engineering from the California Institute of Technology, and his Diploma in Chemical Engineering from the University of Patras, in Greece. After the completion of his doctoral studies, he held a research group leader position at the Swiss Federal Institute of Technology in Zurich (ETHZ), Switzerland. Prior to joining EPFL, Vassily worked for three years in DuPont, Cargill, and Cargill Dow, and he has been assistant professor at Northwestern University, at Illinois, USA. Vassilys research interests are in the areas of computational systems biology, biotechnology, and complexity. He is associate editor of the journals Biotechnology & Bioengineering, Metabolic Engineering and Integrative Biology, and he serves on the editorial advisory board of the journals Bioprocess and Biosystems Engineering, Journal of Chemical Technology and Biotechnology, and Industrial Biotechnology. He has written over 70 technical publications and he is co-inventor in three patents and patent applications. Vassily is a fellow of the American Institute for Medical and Biological Engineering (2010), he was a DuPont Young Professor (2001-2004), and he has also received the Jay Bailey Young Investigator Award in Metabolic Engineering (2000), and the ACS Elmar Gaden Award (2011).

Introduction to Chemical Engineering is an introductory course that provides a basic overview of the chemical engineering field. It addresses the formulation and solution of material and energy balances by using the physical/chemical properties of materials.

The course of Bioreactor modeling and simulation focuses on the principles of algorithmic design and analysis of biochemical reactors. The application of these designed reactors would be in the production line of the of pharmaceutical, biotech and chemical industries.
close