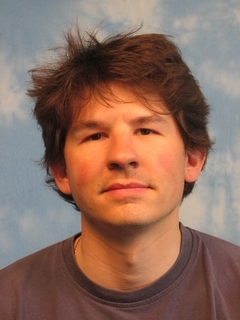 Yves Revaz is a scientist at LASTRO/EPFL. After successful studies in physics at EPFL, he completed his PhD entitled: "Dynamics of external regions of spiral galaxies and constraints on the dark matter", at the Geneva Observatory in the galactic dynamics group of Prof. D. Pfenniger. He then moved to the Paris Observatory to work at the LERMA (Laboratory for Studies of Radiation and Matter in Astrophysics) under the supervision of Prof. F. Combes on the understanding of cooling flows in galaxy clusters. He joined LASTRO at EPFL in 2007, where he developed a new TreePM/SPH chemo-dynamical code called GEAR, designed to study the chemical evolution of galaxies. His current main research focuses on the evolution of dwarf spheroidal galaxies and their link with  cosmology. Yves Revaz is also the author of pNbody, a parallelized python toolbox designed to manipulate large N-body systems. He also led the development of VIRUP, an interactive virtual reality (VR) environment that lets anyone discover the cosmos through observed and simulated data. Between 2020 and 2021, he directed the realization of two films (in 2D, 3D, 180-3D and 360-3D) fully based on VIRUP. A short movie presenting the most complete 3D map of the Universe as observed by the eBOSS survey and a 21 minutes-long documentary entitled Archaeology of Light, where we chart out a journey throughout the various scales of the Universe.

From dwarf galaxies to galaxy clusters: Self-Interacting Dark Matter over 7 orders of magnitude in halo mass

K. Bondarenko; A. Sokolenko; A. Boyarsky; A. Robertson; Y. Revaz

The post-infall evolution of a satellite galaxy

The Origin of the Diversity of Dwarf Spheroidal Galaxies

A Population of Compact Elliptical Galaxies Detected with the Virtual Observatory

The aim of this course is to acquire the basic knowledge on specific dynamical phenomena related to the origin, equilibrium, and evolution of star clusters, galaxies, and galaxy clusters.